Other Books Co-Authored or Co-Edited by the Author

Kathryn Britton and Shannon Polly, Eds., Character Strengths Matter: How to Live a Full Life. Positive Psychology News Series, 2015.  In total, 26 people contributed short articles about the application of character strengths, and Kevin Gillespie drew original sketches to illustrate each strength.  The book includes application ideas from Tayyab Rashid’s growing collection of strengths interventions.  It also includes at least one poem, speech, or dialogue to illustrate each strength to give people the opportunity by reading aloud to act as if they had each strength.

Shannon Polly and Kathryn were invited to write the chapter titled Acting “As If” in Executive Coaching for:

Richard Summers and Dilip Jeste (Ed.), Positive Psychiatry: A Casebook. American Psychiatric Association, 2019.Challenged to write a case demonstrating positive psychology interventions (PPI) in executive coaching, their goal was to show that PPI can be adjusted to fit professional and non-clinical environments.  The chapter is about the theme of acting “as if” in order to build qualities that one wants more of.

John Yeager and Kathryn Britton were invited to write the chapter titled Positive Psychology Coaching for Sports Leaders for:  Abbe Brady and Bridget Grenville-Cleave (Ed.), Positive Psychology in Sport and Physical Activity.  Routledge, 2018. Drawing on John’s relationships with sports leaders and their mutual understanding of positive psychology applications, Kathryn and John showed how policy makers in sports can can use positive psychology concepts and actions to address the immense challenges involved in balancing conflicting goals.

Marie-Josée Shaar and Kathryn Britton,  Smarts and Stamina: The Busy Person’s Guide to Optimal Health and Performance. Positive Psychology Press, 2011.
Smarts and Stamina demonstrates that health, happiness, and productivity are mutually reinforcing.  This highly practical workbook contains 50 activities, 10 each in the categories of sleep, food, mood, exercise, and general well-being. Chapters include Exercise on Company Time, Perishable is Honorable, and Leisure that Matters.

Kathryn Britton and Senia Maymin, Eds., Gratitude: How to Appreciate Life’s Gifts.  Positive Psychology News Series, 2010.A collection of articles and comment discussions from Positive Psychology News on the topic of gratitude with original illustrations by Kevin Gillespie.  The articles range from a mother describing doing the three good things exercise with her 7-year-old son to discussions of finding gratitude in times of illness or job loss.  The discussions after each article are selected from actual comments posted on the site.

Senia Maymin and Kathryn Britton, Resilience: How to Navigate Life’s Curves. Positive Psychology News Series, 2009.A collection of articles and comment discussions from Positive Psychology News on the topic of resilience with original illustrations by Kevin Gillespie.  The book concludes with a summary article by Kathryn in which she summarizes all the resilience approaches described in earlier book chapters:  resilience is physical, social, draws on positive emotions and curiosity, and so on.  The discussions after each article are selected from actual comments posted on the site.

Selected Articles by the Author

More than 100 short articles on a wide range of topics in positive psychology on Positive Psychology News.  Some of her favorites:

Thomas Atterstam, Kathryn Britton, Emma Westcott Judge, and Miriam Ufberg Rosetti, A values-based authenticity model. My cohort during MAPP wrote this paper describing an authenticity model that I think makes a lot of sense. We presented it at a conference in 2007.  The goal is to spend as much time as possible in Q4, the Instinctive Authenticity quadrant. 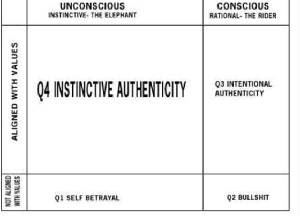 I mentioned writing papers as a software engineer to show that writing is multi-purpose.

Kathryn Britton et al, Transcoding: Extending e-business to New Environments.  IBM Systems Journal, 2001. DOI: 10.1147/sj.401.0153.When cell phones were first accessing the Internet, we bet that it made sense to provide a service that could dynamically modifying content to fit cell phone screens and limited wireless bandwidth. It turned out that the world solved the problem in different ways. Bandwidth increased dramatically, and content creators got used to preparing content for mobile as well as full screen presentation. It is fun to realize we were helping explore the space.