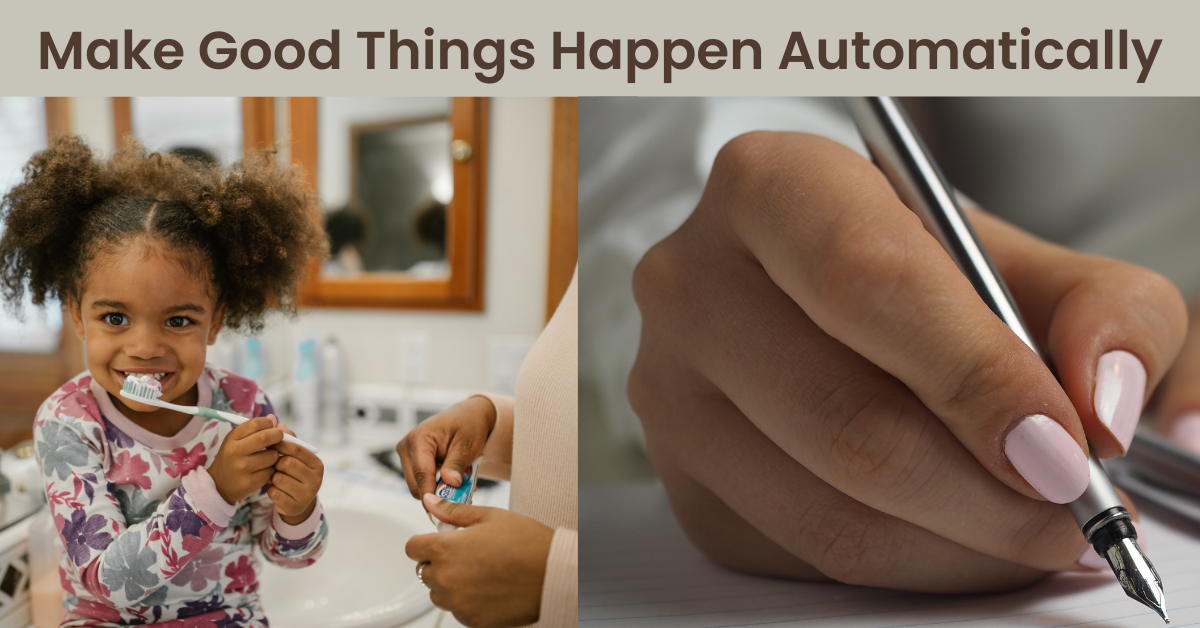 Let’s assume you’ve decided that you want to write regularly  Regularly is the key.  The answer may be to build a writing habit by taking advantage of the way your brain wires things together.

Think about a habit that almost all of us have firmly engrained:  brushing teeth.  You can probably thank your parents for helping you create this habit.  They stood over you at bedtime day after day, reminding you to brush your teeth.  Perhaps they shepherded you into the bathroom to brush teeth right after getting you up.  Now you brush your teeth regularly without expending a lot of will-power.  Your brain has wired this behavior to getting up and preparing for bed, and you reinforce the habit practically every day.  Remember how uncomfortable it can feel to be somewhere at bedtime without your toothbrush.

Building a new habit does take some effort, but an awareness of how habits form can help you out.  Let me illustrate with a recent email exchange with two members of my writers’ workshops.  They are letting me use their first names.

A Habit in the Making

Recently, Carol submitted a piece of writing early.  I always feel like celebrating when that happens.

Jubilantly, Carol wrote in the email that accompanied her piece, “I’m working on some new writing habits that seem to be really powerful.  Now I just have to get these habits to become … habits that stick!!”

I responded, ccing Kim who is the usual facilitator of Carol’s workshop.  I belong to that workshop as a writing member.

“Remember what you need to establish a habit:

Carol responded, “Just took a screen shot of this!!! Thank you – needed this.”

Intentionally forming a habit involves wiring a desired new behavior to a particular cue. As I thought about it later, I decided there are really five ingredients to building a habit.

The cue needs to be something that happens reasonably regularly.  It can be a particular time of day, a particular meal, a place, another action that is already a habit, or an alarm you set.

For example, my sister formed the habit of calling our mother daily during her last few years by setting an alarm on her phone.  Even after Mom died, she kept the alarm, replacing the habitual action, “Call Mom,” with a different action, “Remember Mom.”

Some people use getting dressed as a cue for behaviors such as brushing hair or applying makeup.  There’s no reason you couldn’t add “Write 500  words,” to that list.

Think about other habits you’ve already formed.  What are the cues that stimulate your action?  With brushing teeth, is it putting on pajamas, or washing your face, or getting out of bed?   What are  you already doing regularly that could be an anchor for a writing habit?

How often do you want to perform your new habit?  A daily habit probably forms faster than a weekly habit, since you reinforce it more frequently.  But perhaps you don’t want to write daily.  If weekly, is there some event in your week that could stimulate you to write?  Be prepared to reinforce this habit very regularly as it starts forming.

What exactly do you want to do as your desired behavior?  Make it something that you can do reliably right now.

BJ Fogg advises tiny habits, small habits that can be expanded over time. According to his research, people are more likely to carry them out reliably.  Is writing for 30 minutes something you often talk yourself out of doing when the cue happens?  Try writing for 15 minutes or even 5.

After you’ve done your tiny habit reliably for a while, gradually increase it.  The key is that you do this desirable behavior reliably enough to reinforce the connection between the cue and behavior.  Think of it as making the wiring between the two stronger and stronger.

Anticipating a reward stimulates the production of the neurotransmitter dopamine in your brain.  Dopamine enhances the wiring between cue and behavior.

I personally have built a regular habit of riding an exercise bicycle by giving myself something small and sweet to eat in the last 10 minutes.  It’s the anticipation that reinforces the strength of the wiring.  I don’t generally eat sweets, so this is a special treat that I’ve used to connect a time and an action.

The reward doesn’t have to be large, just something that you know you’ll look forward to.  So perhaps you reward yourself at the end of a writing session with a game you like to play, a piece of chocolate, calling a friend, or listening to music.

Want some more ideas for reinforcing a writing habit?  I explored building habits in Sit Write Share from three slightly different angles.  You can find the experiments themselves in the book.  The links below connect to the background resources I have collected around habits.

All three of these experiments rely on the need to perform a wanted action regularly enough and often enough to create a brain connection between some cue and some behavior.

Building a habit makes it more likely that  you will perform a desired behavior like writing because it lowers the need for either memory power or will power.  I am sure you have other uses for both in the rest of your life. 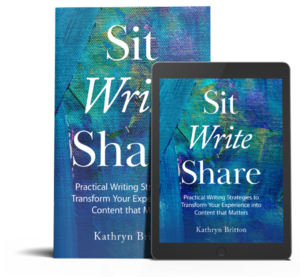